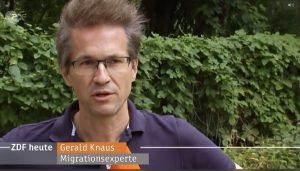 In recent weeks, we sent a number of letters to European policy makers with concrete suggestions how Spain, Germany and others might move ahead in addressing the current Mediterranean migration and rescue crisis. Here is a summary of some of the concrete things that we suggested in these letters (and in a few meetings):

There needs to be a strong joint commitment to sea rescues.It is unacceptable to let people drown who might be saved with more effort. In June 2018 – the first month with Italian Interior Minister Matteo Salvini –more people drowned in the central Mediterranean than in any June in the past decade!

While it is crucial to send more rescue boats, this is not in itself enough to reduce deaths. The deadliest six-month period in the Mediterranean was actually the period May-October 2014, when Italy was fully engaged in its ambitious rescue mission (Mare Nostrum): more than 3,000 people died on the way to Italy. (The deadliest full year was 2016, the year when most rescues took place).

Spain, France, Germany and others should provide more rescue boats outside the Libyan territorial waters. The objective must be to ensure that nobody drowns; while arrivals are reduced without push-backs.There are three possible ways to achieve this:

discourage people who have no need of protection from coming, by sending a clear message that those who do not need international protection will be returned to their countries of origin quickly, following a fair but fast asylum procedure.

work with transit states that stop boats leaving (as Spain did with Senegal in 2006 and with Morocco for a longer period; as Italy and the EU have done, much more problematically, with the Libyan coast guard since early 2017; or as the EU and some members have done working with Niger to stop smugglers taking people through the Sahara).

send back people who are rescued to North Africa, or to some “processing platforms”, as Matteo Salvini, Viktor Orban and Sebastian Kurz have long advocated as “Australian solution”, modelled on Nauru; an option the last EU council requested should be studied. This is both highly problematic legally and completely impractical. When some European leaders present such platforms as their proposal what they really appear to want is a thin cover for push-backs to Africa.

The first option is by far the best. It represents a real humane alternative to Salvini’s current approach. It combines control and empathy, sea rescues and returns.Can a strategy based on this first option be implemented? Yes, it can.It would require three concrete measures:

1.      European RICs – registration and identification centres, what the European Council called “controlled centres” (the term hotspot, discredited by the awful conditions on the Greek island, should be dropped): i.e. humane, decent accommodation centres, set up in European Mediterranean countries of arrival, jointly funded, perhaps even jointly run, as concrete expressions of solidarity. The opposite of the current Greek hotspots in crucial aspects:

Ensuring sufficient space and decent treatment of everyone (modelled on the Dutch Ter Apel asylum centre; or European “Ankerzentren”, as agreed in the German coalition agreement), these should set a model how a coalition of European countries respects human dignity. There should be full transparency.

A time limit: nobody will be kept in a RIC longer then 2 months at most. The goal is to ensure that a first asylum procedure and an appeal are possible within 6 weeks for most cases.

Set up an immediate coordination board of senior officials from reception and asylum services of European countries that want to make this possible: the Dutch, French, Germans, Benelux, Portugal, Nordics, but also inviting Swiss and Norwegians, both members of Schengen and Dublin. Create a small secretariat to set out realistically the human resources needed for this (perhaps based in Madrid.) Appoint a credible coordinator with administrative experience to ensure that resources arrive in time. Learn from Greek islands experience: outsourcing this to EASO, under current procedures, is not going to work, as can be seen in Lesbos or Chios.If France would offer to host such a centre in Corsica (for people rescued in the central Mediterranean), if Malta would as well, it would be even better. Then such RICs should replace the current hotspots in Greece – to help accelerate asylum procedures, increase returns from the islands to Turkey (which currently stand at only 25 a month!)  and to relieve the humanitarian crisis on the islands.

2.      Immediate outreach to key African countries of origin for LARS (Legal Access and Return statements). Appoint a joint team (one Spanish, French, German) to go to West African countries first to offer simple and transparent statements. These statements should include:

Commitment from a coalition of willing EU member states to annual contingents of legal migration and scholarships to these EU countries in the next five years.

Commitment from African partners to take back everyone who crosses the Mediterranean after a day X and does not apply for or does not receive asylum in the EU. The goal is that the announcement itself sharply reduces arrivals.

Start negotiations with some African countries now (Senegal, Ivory Coast!) It is vital that other countries in Africa see this as attractive and want similar arrangements.

3.      Commitment by European members of this coalition of concerned countries to quickly relocate those who get protection in these RICS, so there is no special burden for Spain – relocating recognised refugees, not asylum seekers.

Some recent endorsements of ESI’s proposal (many in German)