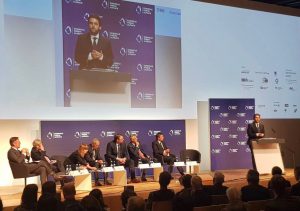 Thank you very much for an opportunity to to talk to you this evening. It is so great to be back here after eight years.

Let me introduce myself. I think it is the easiest way for me to convey a message that I would like you to leave this room with.

I was born in 1986 in a small town in northern Bosnia-Herzegovina called Doboj. Today, Doboj is in Republika Srpska, one of the two Bosnian-Herzegovinian entities.

I was five years old when the war broke out in former Yugoslavia. I was six when fighting began in Bosnia. Together with my mother and my brother I spent the war as a refugee in Croatia. My father remained in Bosnia and fought in the war.

We were lucky because we all survived. When the war ended in 1995 I was 9. Throughout my primary and secondary school education there was peace in Bosnia. Ther was peace also when I went abroad to study, first in Austria and then in Belgium. There was peace also in 2013 when I returned to Bosnia to live and work there. There is still peace also today in Bosnia.

But I remember very vividely February 1996, when together with my family we went to Doboj for the first time. It was city of horror where Bosniaks and Croats were expelled, all minarets and mosques destroyed and many houses damaged. We did not even dare to say our Muslim names out loud on the streets. For months and years after the war I had nightmares about Doboj.

But since then Bosnia has changed dramatically. The number of foreign soldiers keeping the peace went from 60,000 in 1996 to just less than a thousand today, mostly Austrian soldiers. Since 2006 there is a joint army and conscription has been abolished. I am part of generation of young Bosnians and Herzegovinians that where never forced to use a gun.

But today I stand before you and tell you this story because I am genuinely worried. And I will tell you why.

I do not remember the time before the war but I read a lot about how Doboj turned into a nightmare. I read a lot of Yugoslav intellectuals and politicians talking about borders, injustice and ethnic rights. They were all making a simple but destructive argument:

You are only safe IF your own ethnic group is in control.

You are only safe WHEN and WHERE your own ethnic group is in control.

This idea destroyed Yugoslavia and Doboj. It destroyed families, it has led to mass expulsions and genocide in Srebrenica. It turned borders into frontlines, created new borders drawn in human blood.

But ideas can change. And they did in Bosnia. Doboj is a good example.

Half of the pre-war non-Serb population returned to live there today: almost 20,000 of them. Mosques and minarets had been rebuilt.

The Doboj of my nightmare is today an ordinary city, where Bosniaks and Croats do not fear their Serb mayor. They even vote for him repeatedly. And they all face same challenges: poor health and educational system, too few jobs to compete for.

And this is why I am worried. Today’s Doboj was possible because international community had a clear policy:

NO MORE CHANGES OF BORDERS ALONG ETHNIC LINES.

Some ideas seem innocent at first, but as they grow up they can become monstrous.  The idea that you are only safe if, when and where your own ethnic group is in control is such idea.

The task for our generation is to turn all Balkan borders into European borders: like those between between Tyrol and South Tyrol. In order to do that we will have to do a lot: build institutions based on rule of law, allow freedom of media and do a lot more. It is time.

Thank you very much. 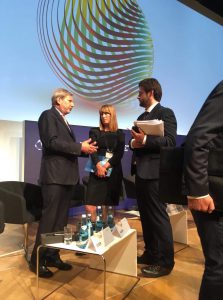