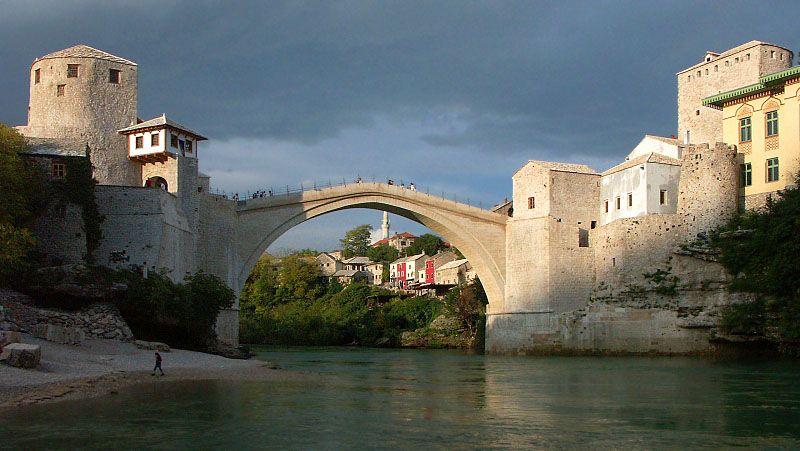 I am currently reading a thought-provoking and entertaining book with a serious conclusion: Wild Europe – the Balkans in the Gaze of Western Travellers by Bozidar Jezernik, published by Saqi and the Bosnian Institute.

It is a book about continuities in approaches to the Balkans. As anthropologist Joel Martin Halpern writes in the foreword:

“In the early twenty-first century, a large portion of the Balkan lands where Muslims live, our principal area of concern, are occupied by NATO troops with UN participation … in exploring Jezernik’s collection of the views of observers of times past, we can easily see how they provide a necessary prologue to the present.”

Halpern notes that in recent centuries outsiders coming to the Balkans would often hesitate to consider anything admirable in the work of the people of the region. He gives the example of the bridge in Mostar:

“… by the mid nineteenth century, when Turkish power had notably declined, travellers no longer attributed the bridge to the Turks, but gave it classical origins. … A nineteenth century account of the bridge at Mostar by an Austrian noblewoman is illustrative. She had the insight to observe of the bridge that ‘history mislabels it as Roman’. But her husband, who oversaw the publication of her book, added in his notes that the bridge was obviously classical, built by Trajan or Hadrian.”

Another Balkan explorer, Sir Arthur Evans, travelling through Bosnia in 1875, noted about the Mostar bridge that “the grandeur of the work … attests to its Roman origin.” The mindset of these travelers, so Halpern, was to ask “how could something unique and of value come directly from the infidel Turks and be located in the Balkan back of beyond.”

The rest of the book gives many more examples of an outlook which views the Balkans as a region of “primitive quarrels and ancient ways of resolving them.” There is the Englishman who describes the eastern coast of the Adriatic as “one of those ill-fated portions of the earth which, though placed in immediate contact with civilisation, have remained perpetually barbarian.” There are the travel reports written for a “broad and enthusiastic public who found nothing more boring than plain facts.” In these writings hyperbole was encouraged. As Jezernik writes:

“In a book on the inhabitants of Bosnia, written by the French consul in Travnik at the beginning of the nineteenth century, readers would frequently come across terms such as wild, ruthless and cannibalistic. In this light, the civilising role of France might have seemed indispensable and could have been used as a pretext for the occupation of Bosnia. The author repeats several times in different words that this country and its inhabitants might change ‘under some other rule’.”

Some time ago my friend Felix Martin and I have written a provocative little article about the colonial gaze of modern day foreigners in the Balkans and the practical consequences of this for Bosnia (Travails of the European Raj – we then put a short picture story on liberal imperialism on the internet, stretching from Mill and Machiavelli to Michael Ignatieff and Sebastian Mallaby).

We noted that in the modern Balkans – as in the past – liberal imperialists emphasied both wild behaviour and helplessness. It is because the Balkans are wild that they need to be contained and it is because they are helpless that they need to be helped. Achievements by the peoples of the Balkans upset this perspective, which is why it is better not to underline them too much.

This is very visible today in Bosnia. While it is admitted that the Mostar bridge is an Ottoman and not a Roman marvel, the approach that every post-war achievement (peace, reconstruction, return, basic reconciliation) is assumed to be the result of international coercion or assistance but rarely or never the product of local effort, remains very much alive. This is obvious also from two provocative articles published in the Guardian and by USIP. The authors – the former High Representative to Bosnia and Herzegovina, Lord Ashdown, and two American Balkan experts with long experience in Bosnia, Bruce Hitchner and Ed Joseph – argue that Bosnia and Herzegovina is today facing a tremendous crisis, and that the only way to save it from itself is through more assertive outside intervention, including maintaining (and using) international intervention powers.

There can be no doubt that all three authors feel genuine concern about and commitment to Bosnia. At the same time their views appear to be shared by many (among the dwindling group of) policy makers who focus on Bosnia today in Washington DC in particular. Theirs is thus a serious perspective that deserves a thorough discussion. And yet, at another level the two articles are also good illustrations of the persistance of the colonial gaze: a gaze which can see no salvation for the wild peoples of Bosnia except by outsiders ruling them directly.

Take a look first at the article by Ed Joseph and Bruce Hitchner. Here is the central argument: 1. “ownership” has been tried and does not work. 2. Without plenipotentiary powers in the hands of an international agency there can be no progress in Bosnia. and 3. the best model for Bosnia’s future is the supervisory regime established in the Brcko district in North Bosnia. In this regime a foreign supervisor retains the power to remove elected and appointed officials from power:

“The vast majority of progress in Bosnia has been the result of international prodding. Experiments with “local ownership”. most notably during the regime of High Representative Christian Schwarz-Schilling, resulted in severe gridlock and left the international community’s credibility in tatters …

“There are no plans for the successor EUSR to retain the plenipotentiary Bonn Powers of the High Representative that have been the international community’s primary tool to overcome obstruction. However, recent history suggests that it is expecting far too much of the Bosnian parties to operate together as a typical aspirant country … an empowered EUSR will still be needed at the helm to steer the parties toward agreement and overcoming the inevitable recalcitrant party or parties.”

“A viable model for Bosnia’s EUSR is not only the predecessor OHR, but also the successful Brcko Supervisory regime. Brcko has been the exceptional success story in the country due in part to the knowledge that an empowered outside actor could step in to avoid and break deadlocks. … The EUSR should be expressely required to state which party or parties have been responsible for failure to achieve progress and to make recommendations about corrective action, including removal from power or blacklisting them from traveling within the EU.”

These are very strong claims, about the recent past as well as about the possible futures of Bosnia: Bosnians among themselves are held to be unable to govern themselves without a strong supervisory regime (as exists in Brcko district). This is also unlikely ever to change. After all, there are no constitutional problems for governance inside Brcko District (which was designed completely by foreigners), and the only complication there appears to be the fact that there are indeed Bosniaks, Croats and Serbs living together: and yet, until today this “exceptional success story” continues to require the corrective powers of a foreign supervisor! The implication is that as long as Bosnia/Brcko are multiethnic societies the only way to make elected representatives reach compromises is to threaten them with the sanction of imposition or removal. Brcko is, after all, not a model for multiethnic democracy!

The article by Ashdown also refers to Brcko as a model, calling it a “multi-ethnic markedly successful sub-entity.” Ashdown evokes the threat of war in Bosnia to draw attention to his call for more assertive international action, noting that what would change people’s “calculation in favour of blood” in Bosnia would be continued efforts to divide the country. And such efforts, he underlines in the same article, are continuing and will most likely continue without stronger international engagement. As he writes: “You do not need imagination to know what happens when things go wrong in Bosnia – a memory ought to be enough.”

But is the evidence from recent years truly that a multi-ethnic Bosnian democracy remains an impossible dream? That the only way to improve things in the country is by international imposition? And that Bosnians might soon make a “calculcation in favour of blood”? Let me return to this question in my next blog. In the meantime, I am looking forward to any comments or suggestions.