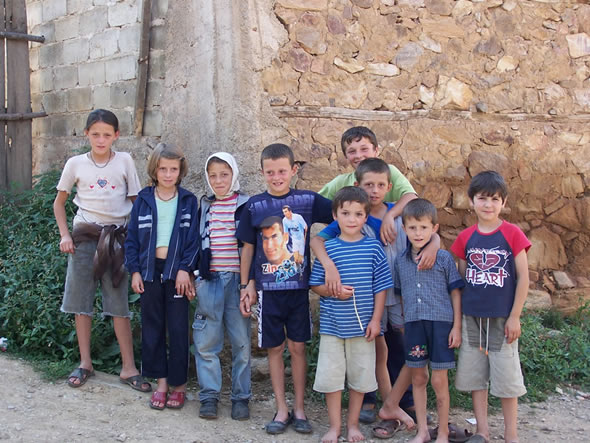 They are waiting for a BHAG: children in Kosovo

Governments of small states who want to send a positive message to the outside world need a BHAG: a Big, Hairy, Audacious Goal.  This is not a matter of public relations.  It is about actually doing something new, difficult and innovative, something that both transforms society and carries a larger message for the world about the will of this society to change.

The small country of Estonia (1.3 million people) had a BHAG: turning itself into an internet-savy, forward looking and information-technology-friendly society.  Thus Estonia created a national infrastructure of wireless internet access, free of charge, covering the whole country.  It set out to create early on one of the most advanced forms of e-government.  And while doing so it did not forget to tell the rest of the world about its experience.etf

A few weeks ago in November I went to Tallinn for a meeting of the European Council on Foreign Relations.  Many of the ECFR board members, including, to my surprise, some of the Swedes in our group, had never been to Tallinn before.  At the beginning of the meeting, which took place in the Museum of Estonian Architecture, an Estonian civil society representative gave a 10-minute video-assisted presentation about his country. It was short but effective and even a few weeks later it is easy for me to recall its main messages: that there was an Estonian “singing revolution” (in 1991), which led to independence; that Estonian governments pursued a vision of transparent e-government, including a paper-free government meeting room that has turned into an attraction for visiting delegations; and that Estonia set out to provide free wireless internet access throughout the country as part of a national vision of development. Of course, other Estonian Big Ideas, such as the implementation of its flat tax, have also contributed to its image of being not only open to but a leader in innovation.  This is not a bad record for such a small country on the edge of the EU.

A BHAG transforms or (re)defines a country’s image when it changes local realities in a way that even a critical visitor – the foreign correspondent of a leading international paper, for instance – will accept as impressive. The key is that the policy idea is both fresh and sound and can actually be implemented.  It precedes public relations.  It is about creating the good story that can later be told.

Which brings me to a Big idea which I believe Europe’s youngest and poorest society, Kosovo, might do well to consider pursuing.  It is inspired by Malcolm Gladwell’s last book (Outliers), as well as by ideas I had preparing recent presentations on Kosovo and the state of the Balkans in Vienna, in Valencia (for NATO parliamentarians) and at Harvard.  For these I had to reread ESI reports and new material on the state of Kosovo. It was not encouraging reading, to put it mildly.

So here is the basic idea: Kosovo urgently needs to convince first its own citizens and then the world that it is serious about addressing one of its most crippling structural problems, a wide education achievement gap with the rest of Europe.  It needs to do so urgently; with the limited resources it has at hand, it also needs to be innovative.

The basic problem is clear: today Kosovars are less well educated and less prepared to compete in the common European market than almost any other society in Europe.  School enrolment rates  (including at secondary level) are low and have not improved in the past four years. Two out of three young people leave the education system without any qualifications.  More than 10 percent drop out of compulsory education.  The vocational training system is in dire straits. And there is a lack of money, even if spending on education has increased as a percentage of GDP: it does not help that Kosovo’s GDP is in fact one of the lowest in Europe.

Kosovo policy makers thus need to find a way – despite limited budgetary resources – to make rapid and serious progress in addressing education problems while convincing the rest of the world that in this field the situation in Kosovo is not only not hopeless but that the rest of the region might even learn something from Kosovo.

Learning from Kosovo in the field of education policy?

You can certainly see why this would be both a surprising and fascinating topic for articles in the European press – and conversations in European capitals – in a few years time.  It sounds counter-intuitive enough to be interesting.  But is it possible?

On the other hand: who would have thought that one could learn so much from Estonia even one decade ago?

In fact, being forced to think outside the box can sometimes help identify good ideas. The proposal is simple: Kosovo should become the first country in Europe to abolish the long summer school vacation. Kosovo children should be able to spend more hours per day and more days per year in primary school than children anywhere else in the region. This additional time in school could be used to give Kosovo pupils one of the most solid basic educations in the region.

This proposal would address three major problems at once:

1. There is in fact a desperate shortage of space in Kosovo schools. As a number of recent reports noted, school infrastructure is stretched “almost to breaking point” (ETF country analysis, May 2008). The majority of schools in Kosovo operate in two shifts, and a significant minority even in three. Given the growth of Kosovo’s  young population, demand for space will increase further.

So there is an urgent need to use space more efficiently. It seems a waste of resources to leave schools empty during the summer. It is also silly, given the need to import expensive energy, not to use the summer months for teaching as well.

2. At the same time, first shortening and then abolishing the long summer vacation could help young Kosovars catch up and – in some fields – overtake other European students, particularly when it comes to basic skills taught at primary school level.

One way to do this with limited resources would be to increase the number of hours and days students spend in primary and lower secondary school classes. Currently, due to space constraints, Kosovars probably spend less hours in school than pupils in most other parts of Europe. The goal should be to reverse this and to use any additional hours to increase teaching foreign languages and basic reading, writing and mathematic skills at an earlier age than in other countries in the region.

As Malcolm Gladwell points out in Outliers, citing the example of a  public school in NY, the number of hours spent in school does matter a lot, particularly for those from a disadvantaged background. The tradition of a long summer vacation – “considered a permanent and inviolate feature of school life, like high school football or the senior prom” – is above all a problem for children from poorer families: it is vacation time that explains a large part of the “achievement gap” between richer and poorer children in different tests done in the US.  This can be measured by comparing students’ scores on tests at the beginning and at the end of long summer vacations:

It is not hard to think of Kosovo pupils as the “poor kids” in comparison to any European country. The average Kosovo household probably owns fewer books than the average Slovenian or Irish household. Vacation time is probably used less often for further education in (still largely rural) Kosovo than in most other European countries. There are also fewer private schools and other education opportunities for children during the summer.

Thus a long summer vacation is a luxury Kosovo should reconsider if it wants to become a competitive economy.  And there are examples for this: while the average school year  in the US is 180 days long, it is some 190 days, in Finland, and 243 days lin Japan (German Länder also have shorter summer vacations; see the article by Michael Barrett below under recommended reading.)

3. Finally, there is a need for a clear and compelling vision to mobilise Kosovo society around the need to dramatically raise educational standards. Currently the realistic goal of Kosovo education policy is to avoid falling further behind. There is already now a huge achievement gap, – and it must not grow even larger.

Not falling behind is not the same as catching up. What Kosovo needs is not merely to prevent the gap from growing: it needs to close it! And the best way to do so is to invest significantly in providing the best possible primary education to children at a very young age.

This would require major efforts: more teachers, adjustments in teaching standards, further revisions of curricula (to focus more time on core skills at an earlier age).  There will be many who would argue that for this or that reason it would be impossible to do.

But if more teachers are required, why should more teachers not be trained? This certainly seems one of the most obvious investments to make in Kosovo’s future. Given extremely low employment rates – especially for women – there is no shortage of potential primary school teachers. Still, government incentives are necessary.

A radical and innovative step such as this would also send a clear signal that Kosovo society is serious about catching up. It is a radical and realistic idea. And if it works, it is only a question of time until some neighbours will come and see whether there is something that can be learned here.

Thinking about a prosperous future for Kosovo requires thinking outside the box.  Current trends will not lead to closing the gap. Kosovo is not in short supply of strategic documents on education: there are strategies for developing higher education, for developing pre-university education, vocational education strategies, a national strategy for entrepreneurship education and training, an adult education strategy, and many more.  However, as one very recent assessment noted:

“None of the planned activities in the operational plans accompanying the strategies have been implemented as foreseen.  This is due not only to unrealistic planning but also to low programming and implementation capacities at all levels of the sector, central and regional.” (Lida Kita, European Training Foundation working paper, May 2008)

Further strategies are being prepared, and a new study is planned to “enable Kosovo authorities to depart from fragmented strategic documents” and move towards a “strategic framework for lifelong learning.” There is a very active and committed young Minister of Education, Enver Hoxhaj. There are some committed donors.  So not all is as bleak as the status quo and current trends would suggest. But Kosovo still urgently needs a Big Idea, and becoming an innovator in the field of education policy seems a very good way to start. Questioning the need for a long summer vacation, and defining the national target as a primary education system as good as anywhere else in Europe, seems a good point to start.

PS: Next week I will travel to Kosovo to give a presentation, show a film, and hopefully to test this idea with policy makers and friends, including the current Minister of Education. If there is any interest to explore this further, there might be some ESI discussion paper on this in the coming year.

3 Replies to “Abolish the summer vacation: a realistic Big Goal for Kosovo”