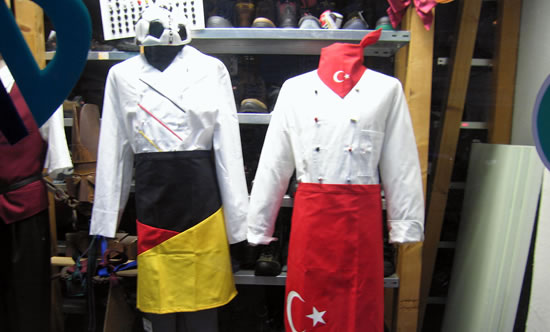 Multikulti is dead – or is it not? Shop window in Berlin-Neukoelln.
Photo: flickr/Schockwellenreiter, Gabriele Kantel

This is not promising.

A few weeks ago Angela Merkel’s reaction was to reject the anti-Muslim populism of former Bundesbanker Thilo Sarrazin; later she defended the observation by German president Wulff on German national day that “Islam is part of German reality”.

Now, however, German Chancellor Angela Merkel apparently feels that it is time to make some rhetorical concession to the wave of anti-Muslim sentiment washing across Germany. Speaking to young members of the CDU, one reporter noted, she explained that

“the so-called “multikulti” concept – where people would “live side-by-side” happily – did not work. Mrs Merkel’s comments come amid recent outpourings of strong anti-immigrant feeling from mainstream politicians. A recent survey showed that more than 30% of Germans believed Germany was “overrun by foreigners”.”

This follows statements by Horst Seehofer, the leader of the CDU’s Bavarian sister party, CSU, that it was “obvious that immigrants from different cultures like Turkey and Arab countries, all in all, find it harder”. Or Thilo Sarrazin’s statement that “no immigrant group other than Muslims is so strongly connected with claims on the welfare state and crime”.

There are many things that can be said about this debate, which is rapidly emerging as one of the most important for the future of a number of European societies. ESI has in fact put together a picture story with some facts and figures about Turks in Germany in 2008, which you find HERE (which we are going to update soon in light of the current debate).

But let me concentrate for one moment on two aspects of this debate which have not yet been discussed much.

1. What does all this mean for the future of EU policy towards Turkey and the Balkans? I put the question also to Carl Bildt, Sweden’s foreign minister, today at a gathering of East European leaders and thinkers in Visby (since the meeting was off the record you have to infer the answer from Carl Bildt’s general positive attitude towards enlargement – as he often puts it, in Europe “Muslims are our neighbours – European neighbours and literally neighbours where we live in our homes”)

When countries like Germany, the Netherlands, Austria or France appear to witness rising islamophobia (defined as the sentiment, apparently shared by almost half of all Germans, that “Germany would be better off without Islam”), it seems natural to expect that this could affect perceptions of applicant countries with significant Muslim populations. Or that it might also have an impact on the German debate on Turkey that (German) Turks are rapidly becoming the least popular group of foreigners; all the appreciation for the successful multicultural national football team – and its new star Mesut Ozil – notwithstanding?

(“This makes Turks come in at the very end of the popularity scale, well after Swedes, Italians, Africans, Jews, and East Europeans. “Turks want more contact with Germans but the Germans show them a cold shoulder”, Pfeiffer says [Christian Pfeiffer is the head of a research centre for criminal sciences that carried out this survey].)

Ironically, at the same time, German newspapers in recent days have been full of concern about the phenomenon of “anti-German” racism on the part of these very same young German Turks. (If you read German then read this: “Racism – the silence of schools towards hostility against Germans”)

Now clearly this phenomenon – Deutschenfeindlichkeit – exists. It is a visible problem in certain schools and urban areas in Germany; anybody who has lived in some parts of Berlin, particularly Neukoellkn, knows this. At the same time, suggesting, as some have done recently, that this issue has until now been a “taboo”, not noted or discussed before for reasons of political correctness, seems bizzare, if one only recalls the heated debate which took place in 2006 when the film Knallhart – about Arab and Turkish gangs dealing with drugs mistreating a young German in Neukoelln – came into German cinemas:

“David Kross stars as 15-year-old Michael Polischka, who’s forced to move from posh Zehlendorf to run-down Berlin-Neukolln after his mother, Miriam splits from her wealthy lover, Doctor Peters. Though he quickly makes friends at his new school, Michael also finds himself the target of a gang of vicious bullies, led by the sadistic Erroll.”

Erroll, of course, is a Turk and the debate about the film focused on the aggressiveness and macho-culture of young German Turkish gangs. And yet, the survey data suggests that Deutschenfeindlichkeit is less prevalent than the opposite reaction: widespread anti-Turkish prejudice of young Germans. This excuses neither form of prejudice or racism – but it puts the current debate in some perspective.

However, if a growing number of young Germans (and perhaps Austrians or Dutch?) do not want to have a Turkish or Muslim neighbour, will this not also affect attitudes towards the EU accession of Balkan countries or Turkey?

2. At the same time, there is the question how European debates of this kind will influence inter-religious relations and debates in the Balkans itself. It seems only a question of time before some Balkan leaders appropriate this kind of discourse: for now, it seems easier to build a mosque in Republika Srpska than in Switzerland, which is quite a striking turn of events in light of the 1990s.

Is anybody in the EU aware what the impact of making this kind of talk acceptable would be in the Balkans? If “multikulti” is dead, what does this suggest for the future of multicultural or multiethnic and multireligious societies in the Balkans? There, these kinds of arguments were advanced not long ago by a very different (and sinister) crop of politicians.

ESI is currently writing a report on prejudice and discrimination against Christian Turks in Turkey. It is encouraging that in this area some bad practices and deep prejudices in Turkey are now being challenged. It would be tragic if the discourse about hostile civilisations and the impossibility of living together are now coming no longer just from intolerant Turkish (or Balkan) nationalists, but are the result of a wave of Islamophobia in Western societies.

There is some hope, however: for this debate shows that in some sense today BOTH Turkey and Germany, Europe and the Western Balkans, are struggling with similar problems. Coping with integration, which has both a domestic and a foreign policy (enlargement) component, is in fact crucial for the future of Europe. Coming to terms with the reality of different religions and groups coexisting is not just a challenge for societies in South East Europe today; and perhaps one day soon Germans and other Europeans might even learn something from Macedonians or Montenegrins about tolerance and living together? If Turkey and the Western Balkans would be members by 2020, then the EU will have some 600 million inhabitants, of which 100 million would be Muslims!

All this makes the recent constructive statement of Germany’s president – and previous similar statements by leading Christian Democrats such as Wolfgang Schauble – about Islam in Germany all the more encouraging.

Next week German President Wulff will travel to Turkey. It might be too much to hope, but would it not be wonderful if this would be also be an occasion for Turkey’s leaders to announce some initiative to show that in Turkey efforts are made to overcome prejudices against other religions? For instance a promise to make life easier for Christian churches or for the Orthodox Patriarchate? Would it not be best if leaders in Berlin and Ankara shame each other with their efforts to reach out to minorities and build bridges?

Prejudice is a clear problem; addressing it openly and then looking for solutions is the only way for progress. It is obvious that in this matter, as in many others, a more open, European and democratic Turkey is going to be a huge benefit not only for its own citizens but also for the current EU – and the same holds true for Bosnia, Albania, Kosovo and the rest of the Western Balkans.

What is no less true, however, is that the struggle for tolerance and successful integration is just as crucial in Western societies. As Wolfgang Schäuble defined the goal in 2006, opening the German Islam Conference: “We want enlightened Muslims in an enlightened country.” One might add: “in an enlightened Europe.”