On 5 April 2009 US president Barack Hussein Obama came to Ankara and delivered a speech in the Turkish Grand National Assembly. In addition to praising Turkey he also touched the issue of the position of Turkey’s Christians:

“Freedom of religion and expression lead to a strong and vibrant civil society that only strengthens the state, which is why steps like reopening Halki Seminary will send such an important signal inside Turkey and beyond. An enduring commitment to the rule of law is the only way to achieve the security that comes from justice for all people. Robust minority rights let societies benefit from the full measure of contributions from all citizens” 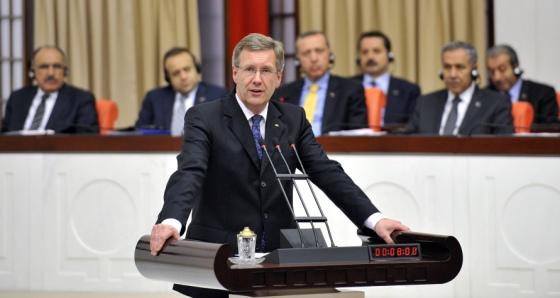 On 19 October 2010 German President Christian Wulff came to Ankara for the first time ever to address the Grand National Assembly. He noted the importance of Turkey as a partner. He also touched the sensitive issue of religious freedom. First in the context of the German debate on integration: in Germany, he said, Muslims were able to practice their religion, pointing to the growing number of mosques being built there. Then he continued:

“At the same time, we expect that Christians in Muslim countries be given the same rights to practice their beliefs in public, to educate new religious leaders and to build churches.”

This is, in fact, one of the most baffling problems of Turkey today.

Given that Turkish politicians are (rightly) noting that the EU should not be discriminating against people or indeed countries just because they are Muslim it is all the more remarkable that so little is done to improve the position of Turkey’s Christians. This seems one area where it should be easy and painless to do the right thing for Turkey’s citizens without paying a big domestic political price. In addition this would be a real boost for Turkey’s international image: initiatives such as opening the Halki Seminary (near Istanbul) for Orthodox clergy, addressing the Patriarch by his official name (Ecumenical) or allowing the small groups of Christians the right to set up churches or register associations would be widely noted and praised outside the country. So why is this proving so hard?

One answer is “technical”. As Orhan Kemal Cengiz noted in an article this week:

“Due to amendments made within the framework of EU harmonization laws (2004-2008 amendments), restrictive provisions in the Law on Associations and the Law on Foundations were eliminated and non-Muslim groups achieved the means of obtaining legal personality, even if not in an entirely satisfactory form. Whereas there were previously verdicts indicating that foundations and associations could not be established on behalf of a congregation, today some foundations and a number of associations in various provinces established by non-Muslims are in operation. While this unquestionably represents a step forward, it cannot be said that these associations and foundations fully meet the needs of the congregations in question. Turkey’s laws and legal practices are in conflict with the main model in Europe, which is that religious communities and institutions are recognized as such and “allowed to register and obtain legal personality, without having to go [indirectly] by way of other institutional arrangements.””

“In its present state, the legislation that provides for non-Muslim groups to gain legal personality is confusing and open to potential abuse. In reality, granting non-Muslim groups the possibility of establishing an association limited to the purpose of “founding a church” creates ambiguity regarding the legal status of these associations.”

But the real explanation – and the reason behind these technical problems – is political.

In order to anwers this question ESI has set out to do extensive research over the past two years, which is going to be published soon on our website. We focused on two groups in particular, both tiny in terms of numbers: Turkey’s Orthodox Greek community (largely in Istanbul) and Turkey’s tiny Protestant community.

One of the most striking things in this matter (which will also be explored more in our report) is the position of the Turkish Armed Forces, supposed guardians of Turkish secularism. In May 2009 Emruhan Yalcin, a retired captain in the Armed Forces and graduate of the Turkish Land Forces Academy, who has spent some years in Germany in the 1990s, published a whole book on the Halki Theological School in May 2009. Its title: “The Last Crusader Fortress” (Son Hacli Kalesi). The final chapter of the book is as clear: “Why the Theological School on Heybeliada should not be opened”. For Yalcin the reopening of the Theological School “has to be evaluated as a political demand symbolizing Hellenic and Orthodox aspirations” Religious education of “men who are enemies of the Turks” will

“transform Istanbul under the roof of a cultural and tourism centre into a Vatican-style religious city with the status of a state, dividing Turkey and building on the divided parts, following the framework of the “Megali Idea”, a Great Byzantine Empire.”

This is not, however, an isolated view at all among men of Yalcin’s background. The view of the orthodox patriarchate or of protestant missionaries as a serious national security threat is taught to generations of conscripts in Turkey’s military as part of their ideological training. In March 2006 the editor of mass-daily Hurriyet, Ertugrul Ozkok, complained openly about this in an op-ed addressed to Yasar Buyukanit, then the commander of the Turkish Land Forces:

This is striking indeed: Turkey, a founding member of the Council of Europe, a member of NATO and a candidate for accession to the EU has a military that teaches young Turks that Christians are trying to destroy the Turkish state!

Such views are not only prevalent in the Armed Forces, of course: it is noteworthy, however, how in Turkish civil society, in the media, in academia and in the arts such views are increasingly challenged. This too is a sign of a deeper change and it dates to the most recent years. This also means that Wulff’s views on this issue will be welcomed not only by Turkey’s minorities. Recent years have seen legal changes to improve the position of Christians. They have also seen a new debate emerge attitudes and policies behind discrimination in the past decades.

It is noteworthy that the almost complete destruction of the Greek population of Istanbul took place in a period of peace, in a Turkey already member of both the Council of Europe and NATO. It was the result of specific politics pursued and expressing a specific mindset.

Table: Istanbul and its Greek population

By the end of the 1970s the total population of Greeks in Istanbul had fallen to below 8,000. In 1991, the year Bartholomew became patriarch, the number of students in all Greek schools in Istanbul was 415. Today it stands at 220.

Note that this means that even if recently things improved, there is an obvious need for the state to be more proactive. In fact, there is a risk today that both the Greek community and the Orthodox Church might disappear in Istanbul by the time the Turkish republic celebrates its 100th anniversary in 2023. 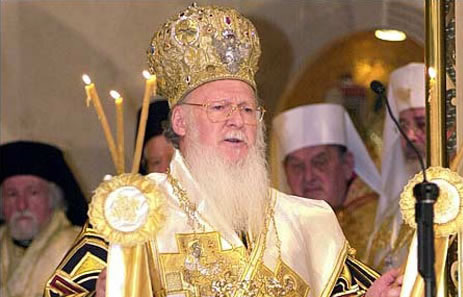 This week the German President will also meet with the Orthodox Patriarch Bartholomew. They are likely to get on well. Perhaps Christian Wulff will then also be able to quote Bartholomew when he returns to Germany, to convey his message that Turkey’s aspiration to be accepted as a full member of the European Union is also in Europe’s interest. In September 2008 the patriarch told the European Parliament:

“Turkey is a country that belongs to the big European family. … We are interested in this as citizens as well as a religious minority. … For accession to the European Union, some set criteria and European values must be respected. In Turkey, we can see efforts being made in this direction, to modernise the country and to fully implement the EU regulations in the national law.”

When a journalist asked him “do you think the process to bring Turkey closer to the EU can help its modernisation?” he responded:

“I am sure it can. In addition, I think the fact that we are a country with a very large Muslim majority should not be a problem, because the European Union sets itself as a reality that respects cultural and religious diversity.”

How better could Turkey advance its intereststhan by embracing both the message and the man, who is after all also a Turkish citizen, born in Turkey, who even served in the Turkish military?

And what could be a better message for Wulff to take back to Berlin and to share with his Christian Democratic friends?

UPCOMING ESI REPORT (soon to be found on the ESI website):