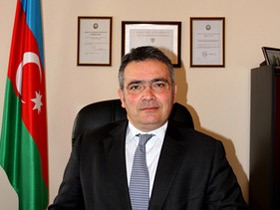 Heading to Strasbourg this week – Ambassador of Azerbaijan to the EU

RIDDLE OF THE WEEK

Dear friends, here is a riddle to begin your week:

Why is Fuad Isgandarov, Azerbaijani ambassador and head of its mission to the EU, heading for Strassburg this week for the next session of the European Parliament? Who will he meet and what will he try to achieve in the interest of his country?

Tomorrrow the Conference of Presidents of the European Parliament will chose this year’s Sakharov Prize winner. One of the leading contenders is one of the most inspiring human rights activists in the world today: Azerbaijani Leyla Yunus.

There is support for Leyla Yunus across the different party groups. And there is growing concern in Baku. More and more of the great people held in its prisons today are being recognised for their courage and awarded international human rights prizes. Millions spent on lobbying firms, on invitations, on hosting events, on paying “experts” to say how oil matters more than a handful of prisoners … all undermined by a few human rights prizes?

The prospect of an Azerbaijani woman being named together with Nelson Mandela, Wei Jingsheng, Aung San Suu, Memorial, Reporters without borders or Malala Yousafzai should delight Azerbaijani patriots. Already being nominated as one of three finalists in 2014 is a huge distinction for Leyla Yunus.

We hope the Ambassador, heading to Strassburg, will spare a moment to read this latest letter by Leyla Yunus – in jail, separated from her husband, who is also held in isolation, as are so many of her fellow human rights defenders:

“They didn’t just arrest us as a married couple. By doing so they restored a “glorious” Stalin tradition. They indicted us to such a bouquet of fantastic accusations (even Yezhov and Vishinki would lag behind), including a life sentence… While in detention, I clearly understood their goal is not just the destruction, but brutal torture, insults, and physical torment, when death becomes the desired escape from the terrible suffering. This is our reality, and I clearly realize it. In other words, our work received the highest mark on the highest scale… Arif I feel so lonely without you! For 36 years we were shoulder to shoulder, and were hoping to celebrate our 40th anniversary but they are so afraid of us… Good Lord, how could a small, weak, sick woman scare the ruling government? With what?! I know you would say, “traveler will tell the Lacedaemon, that here we lie, true to the Law”. But I still think Leonidas had it easier, simpler… One of 300s.”

And perhaps he will reflect, as he meets these MEPs, about what really serves his country’s interest.

More about the Azerbaijani mission to the EU is here: http://www.azembassy.be/?options=content&id=12

“Today the people of Azerbaijan, comprising various ethnic and religious groups, are working towards developing a modern and democratic state with free market and solid social institutions.”

And these are the members of the Conference of Presidents who will decide on the winner of the 2014 Sakharov Prize tomorrow:

President of the Parliament: martin.schulz@europarl.europa.eu

ESI’s work on Azerbaijan started with this publication on “Baku’s Facebook Generation” in 2011 – and the inspiring quotes on the tradition that has influenced young Azerbaijani’s since, the great Central and East European dissidents:

“… they know from their own experience in 1968, and from the Polish experience in 1980-1981, how suddenly a society that seems atomized, apathetic and broken can be transformed into an articulate, united civil society. How private opinion can become public opinion. How a nation can stand on its feet again. And for this they are working and waiting, under the ice.”

“How come our nation has been able to transcend the dilemma so typical of defeated societies, the hopeless choice between servility and despair?”

We then studied the puzzle of increasing repression / decreasing criticism on the part of the Council of Europe, and the strange pattern of international election monitoring in Azerbaijan:

There have been quite a few press reactions to “Caviar Diplomacy”. But there have not been nearly enough reactions on the part of the Council of Europe and other institutions.

We have also focused on the issue of political prisoners – in Azerbaijan and across Europe.

Recently we made a strong case to support Azerbaijani human rights defenders in jail:

There have also been a number of newsletters – many making the case for greater support to Azerbaijani human rights defenders, arguing that their fate matters to everyone concerned about the future of human rights in Europe: