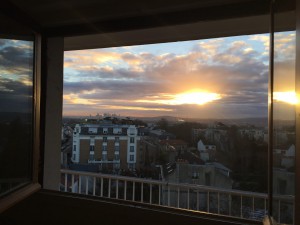 Rays of sunlight on the morning of the European Council

A Friday that starts with a sunrise like this, above the the roofs of Paris, has to go well. And it did.

First, an ESI newsletter went out early in the morning, to be done just as these rays of sun lit up the sky. There was then a lot of positive response during the day, including from important institutions and media.

Next I learned that the internal debate in the EU and in Brussels is shifting away from focusing on relocation towards focusing on resettlement (as we had argued for weeks, sometimes feeling like Don Quijote taking on windmills.) One small step in this (right) direction that is being discussed would be to allow countries to chose whether to accept refugees from Greece or from Turkey directly. The logical next step would be to suspend the focus on relocation altogether. And to do instead what everyone claims is the priority: focus on the EU’s external border in the Aegean.

Third, Greece reminded the rest of Europe today that it is still in the EU, can veto decisions and assert its interests, and that closing Balkan borders to trap people in Greece would trigger a strong and justified reaction. While relocation is not a solution for Greece but a trap desguised as “help”, attempts to close the Balkan route and turn Greece into a huge refugee camp would be an openly unfriendly act. It would undermine hope of working with Greece in the Eurocrisis, and paralyze EU decision making. No serious leader in the EU can want this. One wonders: what were the Hungarians, Slovenes and Austrians thinking … that Greece would just sit and watch as they build a fence?

Fourth, as the idea of “closing” the Balkan route is being looked at more seriously, it is becoming clear to anyone that it is a red herring. Macedonia will not allow itself to be turned into the glacis of Central Europe. It will not do Slovenia the favour and build the wall that Slovenia – the open door to the Schengen zone – does not want to build itself for good reason.

Finally, the leading Turkish expert on refugee issues – now a scholar at Brookings in DC – Kemal Kirisci has published a new paper on the crisis for the EPC. Kemal strongly backs the Samsom plan and the ESI proposals, as the best way forward for Turkey, as well as for the EU. This is very encouraging news, as we head to Istanbul and Ankara for presentations next week. Reading his paper is a great way to end this day:

An ESI presentation will take place in Ankara next week at Tepav: http://www.esiweb.org/index.php?lang=en&id=154&news_ID=677

If only Greece, Turkey and Germany come together around a credible strategy, this might actually work – and now there are another few days until the Brussels meeting between the EU and Turkey in March to achieve this.